The seismic network is currently deployed in the Groningen area of the Netherlands to monitor the seismicity caused by gas production and to image and record subsurface changes in and around the reservoir. 14 broadband stations, installed in 2019, will be operational for the period of 3 years. The network is deployed within the context of the project “Comprehensive monitoring and prediction of seismicity within the Groningen gas field using large scale field observations” funded by the DeepNL research programme of NWO. 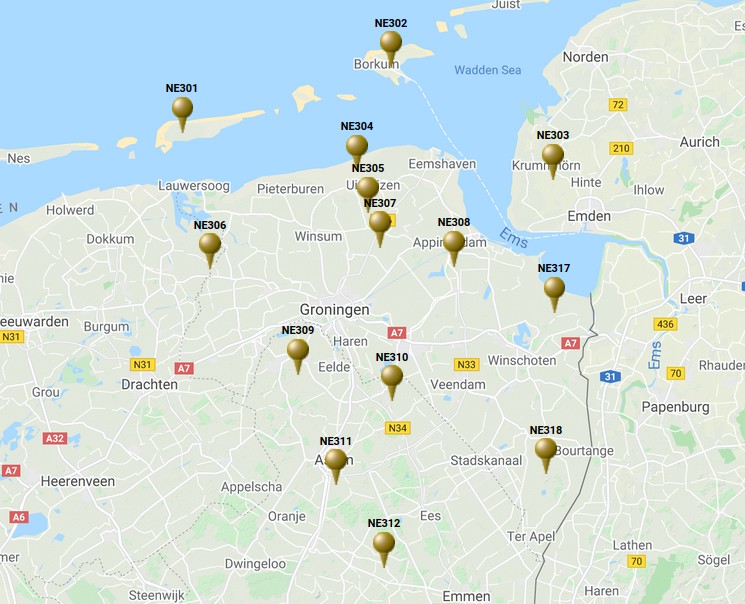 The seismometers used in the NARS DeepNL project are the Nanometrics Trillium 120PH (left) and the Streckeisen STS-2 (right) broad band sensors. Both are electronic force-feedback sensors that provide an output signal proportional to ground velocity over a broad frequency range. Three identical obliquely-oriented mechanical 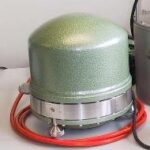 sensors are used and standard vertical and horizontal outputs are derived by summing the raw sensor signals within the sensors electronics. The housing is vacuum-tight and designed to minimize the distortion of the package by barometric pressure changes.The sensors are designed for quick and simple installation, wide temperature range operation, and secure transport, while resolving minimum earth noise levels over the frequency range.

The Seismology group of Utrecht University together with the Instrumental group of the Physics department, developed the NARS seismic data logger. The data logger consists of mainly two components: (1) a data acquisition module, which does the AD conversion and timing. (2) an off-the-shelf embedded computer, for all further data processing. Data is stored on the data logger’s internal hard disk and (optionally) to an external USB stick. All communication with the outside world is done by network communication. The data acquisition module is similar as used with our previous NARS Baja project. For more detailed hardware information go to NARS data logger 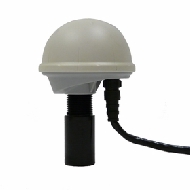 For the NARS data logger timing we use the Trimble Acutime Gold GPS smart antenna. It generates a pulse-per-second (PPS) output synchronized to UTC within 15 nanoseconds, outputting a timing and position packet for each pulse.The data acquisition module is similar as used with our previous NARS Baja project. For more detailed hardware information visit the NARS Baja equipment page.

The Teltonika RUT240 4G/LTE Wi-Fi router independently sets up a VPN (Virtual Private Network) connection with the server at Utrecht University. This makes it possible to log into the Centaur data logger from the server without the need for an (expensive) SIM card with fixed IP. Daily new recorded data is synchronized with the server and email with all important status information is sent. 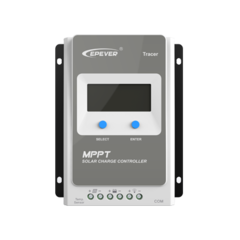 In our setup we use so called AGM (Absorbed Glass Mat) batteries. They are maintenance free, closed and have a relatively long service life. To keep them fit, we use a good quality MPPT charge controller.
An MPPT (Maximum Power Point Tracking) charge controller optimizes the connection between solar panel and battery. The maximum power point (MPP) is the ideal point where current and voltage multiply to provide the maximum power that the given PV system can produce at a given moment.  For more information: www.epsolarpv.com 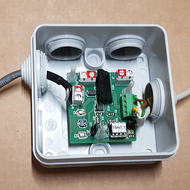 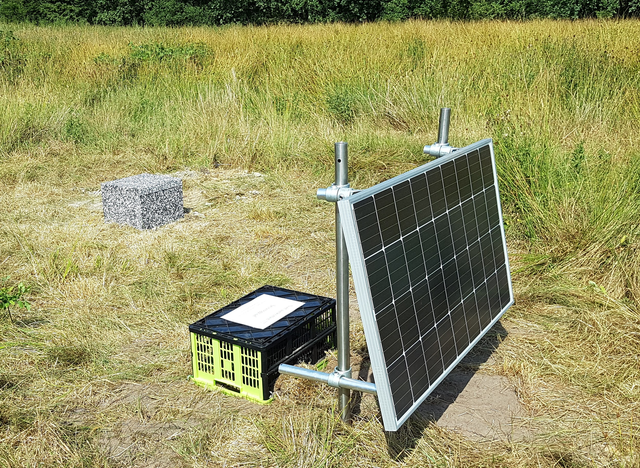 Broadband seismic stations are preferentially installed at hard rock sites far away from cultural noise. However, to find such places in the Netherlands is not possible. The soil is mainly clay, and noise from roads, trains, windmills or farmers is impossible to avoid. We tried to find places as far as possible from noise sources and safe against theft or vandalism.

Most areas in Groningen have a clay soil, but there are some locations with sand or peat. The ground water level is often found just below one meter. Therefore we designed a watertight drill tube with a wide thread at the end. The tube is screwed into the ground and the seismometer and data logger are installed inside. Because of the wide thread and total weight of the equipment, the upward buoyancy force of the water will not push the tube out. The tube is closed with a metal lid and locked for safety with two padlocks. 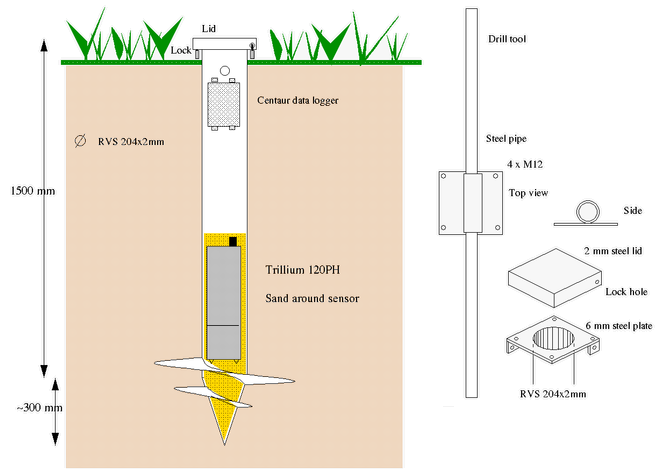 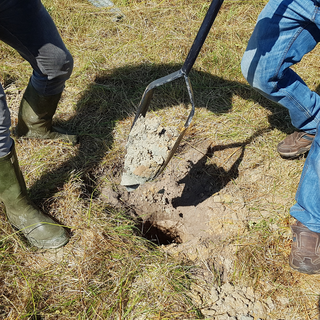 The pipe can be screwed into the ground with manual force, but not before pre-drilling is done with a 20 cm auger to a depth of 1.7 meter. Then, an adapter is placed at the top into which a steel scaffolding tube is inserted. This is extended with two extra tubes to increase the torque. When the tube is screwed in halfway down the hole, a longer adapter is mounted to prevent having to drill close to the ground. Fortunately we had PhD students to do the hard work!

A plastic tube leads from the drill tube to a watertight box which contains the GPS antenna, solar charge controller, 80 Amp Hour battery, 2/3/4G cellular router, and power control box. The box is lowered for two thirds in the ground and covered by a plastic crate. This prevents direct sunlight and the open structure of the crate allows the release of heat. The solar panel is mounted in front of the box to provide additional shadow. 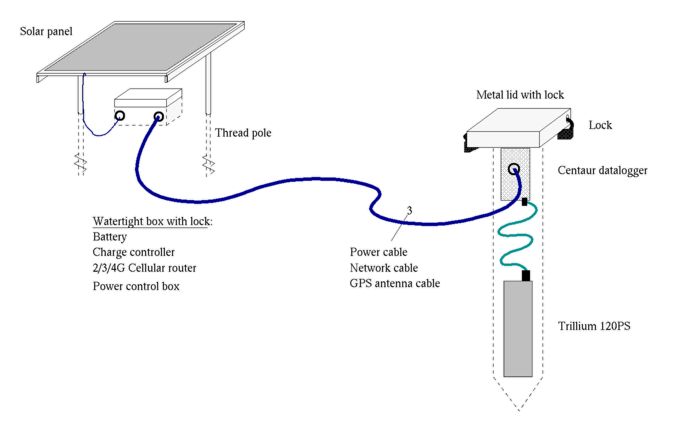 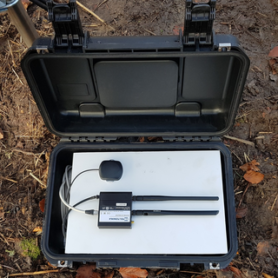 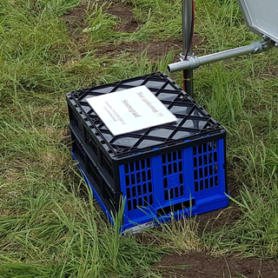 To lower the Trillium 120 PH seismometer in the tube and to orient it, we constructed a special adapter. It can be mounted at top of the sensor using two long wire ends that fit in the existing holes. After the sensor has been placed and positioned, they can easily be loosened and the adaptor removed. The adapter frame is exactly parallel to the N-S indication on the sensor so that it can be oriented with a gyro compass. 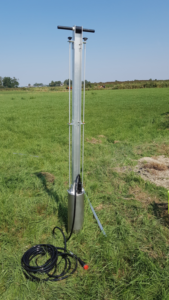 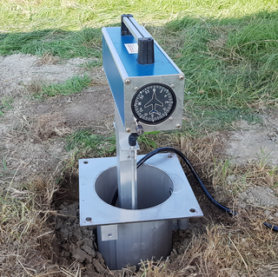 First the cone of the tube is filled with silver sand. Then the sensor is placed, oriented and covered with sand. Insulation pearls in a thin plastic sack are placed on top and the sensor cable is gently coiled up in the tube. 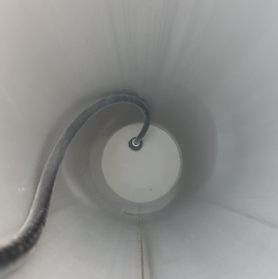 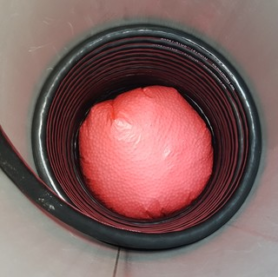 The Centaur data logger also fits in the tube. Finally, the lid is closed with two padlocks for extra protection and it is covered by an insulation box. 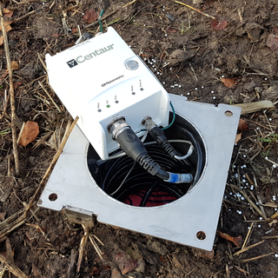 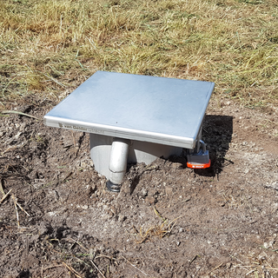 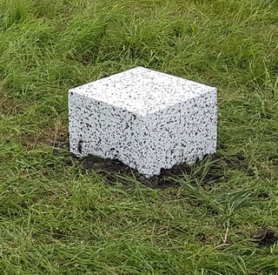 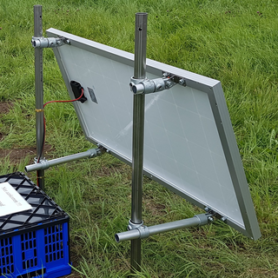 To be independent of electricity supply, the stations are powered by solar energy. The power consumption of a NARS station is only 1.8 Watt, and when the cellular router is switched on it is 7 Watt. Therefore the router is only switched on for 15 minutes every 6 hours, sending data and status information. In December and January the sun in the Netherlands is at an angle of around 15 degrees and usually it shines only a few hours a day. To harvest a much electricity as possible in this time of the year, the solar panel is set at an angle of 15 degrees with the vertical. The panel can deliver 133 W, and in combination with 80 Amp Hour battery it can overcome the winter period. For easy installation we use screw piles with scaffolding tubes and couplings.